PSU Bank Mergers – The potential and the risks

The big news in the financial markets not so recently was the merger of PSU banks.

Many questions get raised: Are these mergers a big bang reform? What is the rationale behind it? Is the timing right or should we have waited? Will it help boost the economy? and more importantly, for all of us, will it increase jobs in banks?

It has been mentioned that the merged banks will result in few big banks that will make them globally competitive. Well, the merged banks sure look big in India and could, perhaps, even enhance its local competitive edge, but one can’t say the same when it comes to global competitiveness. Because to attain global competitiveness, the banks need to be multi-dimensional, multi-cultural and multi-geographical. They need to be financially strong, have a wide global network, professional work culture, global market expertise, global products, strong brand and state-of-the-art technologies. I am not sure we are there yet. Moreover, the global players are already deeply entrenched in the world markets and it will be extremely difficult for the Indian PSU banks to break into that turf. But that does not mean we shouldn’t try. If the merger does help our banks attain the global edge, then it would be a job well done and truly welcome. 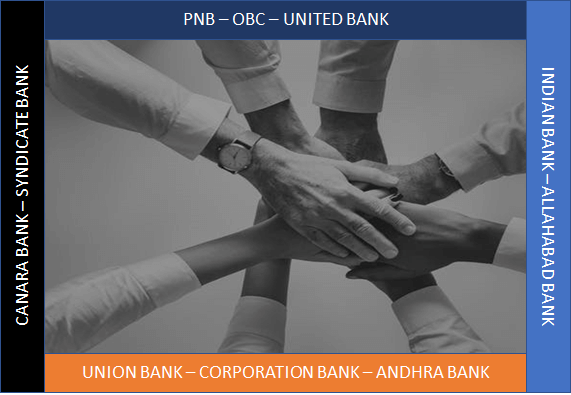 The mergers are being referred to as big ticket reforms, which will help boost the economy. This is not a reform in the first place, but a Merger and Acquisition (M&A) exercise that is being done to address the Non-performing Assets (NPA) and capital adequacy issues, and lending stress in the banking sector. Moreover,  this is being done at an unprecedented scale involving 10 different banks.

THE POTENTIAL IMPACT OF MERGERS

Could we have waited?
I would imagine so because the pressing need of the hour right now is to get the banks to start lending again and get the economy moving. And that may not happen any time soon since the management focus will be on making the merger a success. They will, invariably, get sucked into the nitty-gritties of merger like technology, process, human resources and work culture integration, protesting unions and others.

Ideally, we should have studied the existing pilot mergers of State Banks and Bank of Baroda-Vijaya-Dena Bank mergers before embarking on the current initiative - How are they performing? What were the challenges faced? What are the learnings? Did they achieve the merger objectives? Can we call it a success? If the pilot project is not a success, then we would only end up transferring failure to other entities and on a much bigger scale. Also, an important thing to remember here is that once the merger plans are put into motion, there can be no rollbacks. Demergers will no longer be an option if the mergers were to fail.

Finally, mergers are not just about integrating two or three banks into one. For PSU bank mergers to succeed, we need a mindset and cultural shift, with full functional autonomy, professional management, customer orientation, responsible finance and high corporate governance standards. The mergers, in the end, ought to create value for all stakeholders. Let’s hope it does. Wish them all success!

Sunder is a senior BFSI trainer with NIIT IFBI.

Sunder has been a banking professional who has worked with reputed global banks like HSBC and CITIBANK. In a career spanning 30 years, he has headed many departments and handled diverse assignments in leadership roles. He regularly contributes to the media and his views have often got published in the Economic Times.